I’m sitting at my desk trying to focus and twiddling my hair in my fingers. I tighten my grasp. The hairs are taut and I am so close to the ecstatic feeling of plucking them one by one off the top of my forehead. I take a deep breath.

I remove my hand from my head. I keep typing. I get distracted and my hand goes back to the top of my head. It takes me a long time to write anything.

This is a great accomplishment.

The first time you have a panic attack will be the worst time. It will leave you broken and confused to your core; betrayed by your mind and the sense of self you thought you had.

If you’re lucky, this panic will hit you when you’re older. When you can remind yourself of who you were before this happened, and imagine the carefree times before your brain and your body went to war. A sense of self upon which you can calibrate your future.

If you’re unlucky, you cannot remember the first time you had a panic attack. Your earliest memories of hyperventilation, of trying to curl inside your own skin, of the satisfaction of pulling your hair and biting your nails and gnawing on your gums, already feel familiar. When you look down at your torn-up skin or hide bald spots under the part of your hair, you think of these traits as defining your existence. There has never been a you that isn’t fragile and afraid, always standing on the edge. 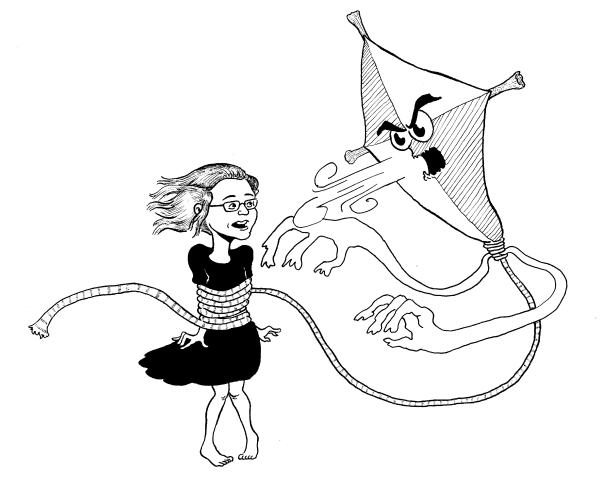 At eight years old I have a list of things that scare me. The dark, loud noises, older kids, kids my age, my imaginary friend Carl, rainstorms, my therapist, enclosed spaces, sports.

In third grade I get special permission to organize the National Geographic collection by myself in the library during recess on days I deem too windy (every day).

The day the fire alarm goes off starts with my mother convincing me to go to school even though I heard the weatherman say the word “breezy” on the radio. At the sound of the alarm my peers file out the door and I go directly to the librarian, only to be told that this isn’t recess and I have to go outside.

I grit my teeth, imagining the apologetic speech the librarian will be forced to give at my funeral after I am swept away by the wind.

As we line up on the field, I lose my composure and all connection to reality. I’m being personally attacked by this weather. My stomach turns with the swirling of the air and I sink to the ground from the weight of it. I’m crying and not quite breathing, and vaguely aware of my teacher unsuccessfully trying to block me from the wind with a group of my classmates.

After this, my peers are careful around me. They don’t know exactly what went wrong, but they understand that I’m fragile. Like their grandmother’s china or the room with the antiques that they’re not allowed to play in.

The first time you see a therapist, you will enter with optimism. You’ve finally given into the idea that you need help and you’re ready for things to get easier. You’re ready for someone to solve your problems.

This changes the moment she tells you to try taking a deep breath when you’re anxious or asks “have you heard of an app called Headspace? It makes meditation so much easier.”

You will leave that first session angry. Pissed. She’s saying the same things as your mother and your grandma and the wikihow article that came up that time you googled “how to calm yourself down.”

You think maybe it’s just her and you need a better therapist, but then you see another and another until you’re forced to come to terms with the fact that no sentence out of any professional’s mouth will magically calm all the noise in your head. It takes time and hard work and practice and even then it’s mostly about holding the pieces of yourself together and learning to cope. You learn for the first time that you only get one brain, and you’ll be fighting it and loving it and hating it and just stuck living in it your whole damn life.

I’m staring down at the light blue fuzzy carpet. She tells me that we’re going to try and create some space between the things that scare me and the actions I take to try and mitigate that fear. I’m already bouncing my legs and biting my nails but I mumble “ok” and check my watch.

“Can you tell me about something that made you anxious this week?”

I pull my knees into my chest as a thousand little things pop into my head. I start to list them out in my mind:

I stop there because nothing in the world makes me more anxious than thinking about anxiety. I tell her about AP World History.

She asks how I deal with feeling anxious in that class.

I look at her, and then look down at myself as an answer. I am bouncing my legs and pulling at my hair and picking at my skin and breathing like a golden retriever.

She starts describing what it’s like to be in that class, and suddenly I’m there. The kids are loud and they’re all saying things I don’t agree with and the teacher is calling on me but I’m about to say the wrong thing and I’m dying to crawl underneath my desk and plug my ears (something I’ve done before).

She tells me to count my breaths.

The room starts to return to focus. I can see the chair and the table and the big green plant that implores me to be calm in this safe space.

In: One two three four five.

I walk home and retreat under the covers of my bed and watch an episode of Gilmore Girls I’ve seen a thousand times until I forget, for a moment, that I exist.

The first time you are given medication you will feel like a lucky fraud. You will take that pill, and then the next day you will leave the house without feeling like climate change is burning off your outer layer of skin and then you’ll think “wow, this is my life now, all I needed was a few extra milligrams of serotonin. Why don’t they give this to babies?”

But then the day after that you’ll remember the climate change. Remember the germs and the other people and the failures and all the embarrassment that makes you want to pull out your hair. You’ll remember your brain, how you’re stuck in it, how it hates you.

And then maybe the day after that you’ll feel better. Because sometimes you do feel better. Sometimes the deep breathing works or sometimes it’s just a good afternoon with friends and you’re really funny.

And then some part of you will wonder if you’re actually getting better. Are you getting older and figuring things out or are you relying on chemicals to pump you full of false confidence? What would happen if all those chemicals went away? Do you really need them or are you a symptom of some deeper American problem where we all fill ourselves with drugs instead of just facing our fears?

I’m in my eleventh grade English class but I’m not really there because I’m busy writing “she has a medical degree” in big block letters in my notebook. My doctor upped my Zoloft prescription to 100 mg yesterday.

My mind starts spinning. Do I even have anxiety? What if this entire time I’ve just been acting like a gigantic drama queen and now I’m taking a ton of medication for no reason.

My hand creeps up to the top of my head and twists around a group of hairs.

What if I end up taking so much medication that I lose all my personality and end up super boring? Then, when I’m 30, I’ll have to write one of those memoirs about how I lived a half-life as a teenager because of all the medication I was on, which will inevitably cause a resurgence of the anti-vax movement.

I yank the strands from my hair, stuff them in my pocket with the others, and then write “at least you’ll be famous” in loopy cursive in my notes.

The teacher calls on me and I give her a bewildered look until she moves on.

Even getting better is scary, because it makes you realize that it’s never going to get all better.

I get up from my desk, stretch, and then take one last deep breath.

I put on my pajamas, dump three pills into the back of my hand, and swallow them whole. On the way out to brush my teeth, I catch my reflection in the mirror.

I stare at my bangs. I have bangs. There used to be a bald spot on the front of my head and now there are bangs that, when swept to the side of my face, look intentional.

I hate them, because they remind me of a bad moment when I completely lost control, and because they grow wildly, as if a toddler took scissors to my head at random.

But on this night, if just for a moment, I can see my accomplishment. This hair is attached to my head. The work of a thousand therapy appointments and pills and reminding myself over and over and over and over that yes, I could pull out my hair right now but no, that is not actually what I want to be doing.

I think about where I want to be. The picture that has been glowing in my imagination since I was little where I stand, unafraid, in a crowded city with long braided hair and manicured nails and a thousand other things that would mean I’m just living, not battling the very neurons that define my existence.

I brush my teeth, get in bed, and close my eyes. I decide, for once, to picture a different future for myself. I’m standing there, in that big crowded city, anxious but adapted. I know when to seek out help and the best ways to quiet my mind, and I’m proud of myself for working at something that will always be difficult.

This, I think, is an achievable goal.